Campaign for the Respect of Rights and Freedoms in Haiti

Education International has launched a campaign to support our colleagues in their struggle for rights and freedoms in Haiti.

For many months, Haiti has been threatened by widespread chaos, marked by the dictatorial abuses of Jovenel Moïse and the violence of armed gangs used by him.

Despite the end of his presidential mandate on 7 February 2021, Jovenel Moïse decided to cling to power and multiply attacks on the country's Constitution, while Parliament has ceased to function for more than a year, for lack of elections.

EI affiliates in Haiti - CNEH, FENATEC, UNNOEH and UNNOH, like many civil society organisations, fear the return of dictatorship and regret the lack of firm condemnation from the international community, in particular from the representatives of the Core Group.

Kidnappings, assassinations, and rapes daily fuel the atmosphere of insecurity that seriously affects students, teachers, and trade unionists, as well as the general population. Children are exposed to gang violence on their way to school, principals are blackmailed, and schools have been closed in some areas for security reasons.

Union leaders continue to be the target of punitive anti-union measures, including arbitrary transfers. The violence is also affecting the country's economy, already among the poorest on the planet, and leading to deteriorating living conditions. 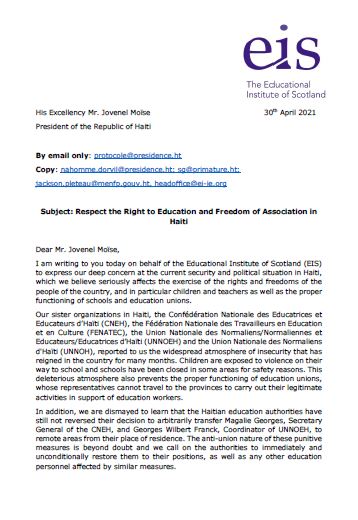